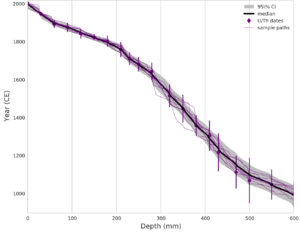 In paleoclimatology, scientists tend to reference the time axis either starting from the present (present often being taken as 1950) and counting positively back in time. In the current LiPD model, this concept is referred to as 'age'. On the other hand, some scientists, especially focusing on the last 2,000 years, use the Gregorian Calendar. In LiPD, this concept is referred to as 'year'.

If yes, is the current nomenclature adopted by LiPD correct?