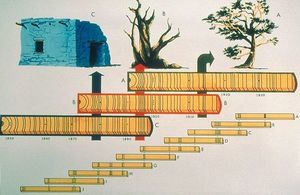 Schematic representation of the process of cross-dating of increment core samples taken from a collection of sampled trees and fossil wood. Photo credit: Laboratory of Tree-Ring Research, The University of Arizona [1]

At chosen sites, several cores from different trees are taken and the cores are dated by comparing the width of the rings back in time, beginning from the year the cores are taken. Taking multiple cores from different trees allow for the identification of false or missing rings in some samples and for the establishment of a master chronology against which subsequent sampled can be dates. Several species, such as the Bristlecone Pine in California and the Huon Pine in Tasmania, have living specimens that are over 3,000 years old, producing long chronologies that can be used for climate reconstructions. Chronologies can be further extended by using fossil wood. The overlapping tree-ring series from the living trees and fossil trees can be linked together through cross-dating, and the remainder of the fossil wood series can be used to extend the chronology. This process can be repeated several times, thus extending the chronology over several millennia in some cases.